Your cart is currently empty

The rating of this product is 0 out of 5

Not suitable for nicotine

The New Volcano Hybrid desktop vaporizer release date was on June 2020. Since then, it has attracted a lot of attention. The new updated version of the well-known and familiar Volcano vaporizer dismissed prognoses. It became the most futuristic and promising desktop vaporizer on the market.

This Volcano desktop vaporizer is the latest incarnation to come out of the workshop of Storz and Bickel. Its revolutionary design is capable of supporting whip vaping and balloons, giving it a lot of versatility.

It heats up quickly, is app compatible. Also, the Volcano Hybrid vaporizer has several other features that make it an excellent purchase. The new Volcano is a big vaporizer that is great for table settings where a group of friends can get together and smoke a bowl in the privacy of one’s home or flat.

The front of the device has a large digital display that makes it easy to monitor its status. A 100-watt heater propels the vapor through the vape, bringing great flavor from the herb without causing combustion. 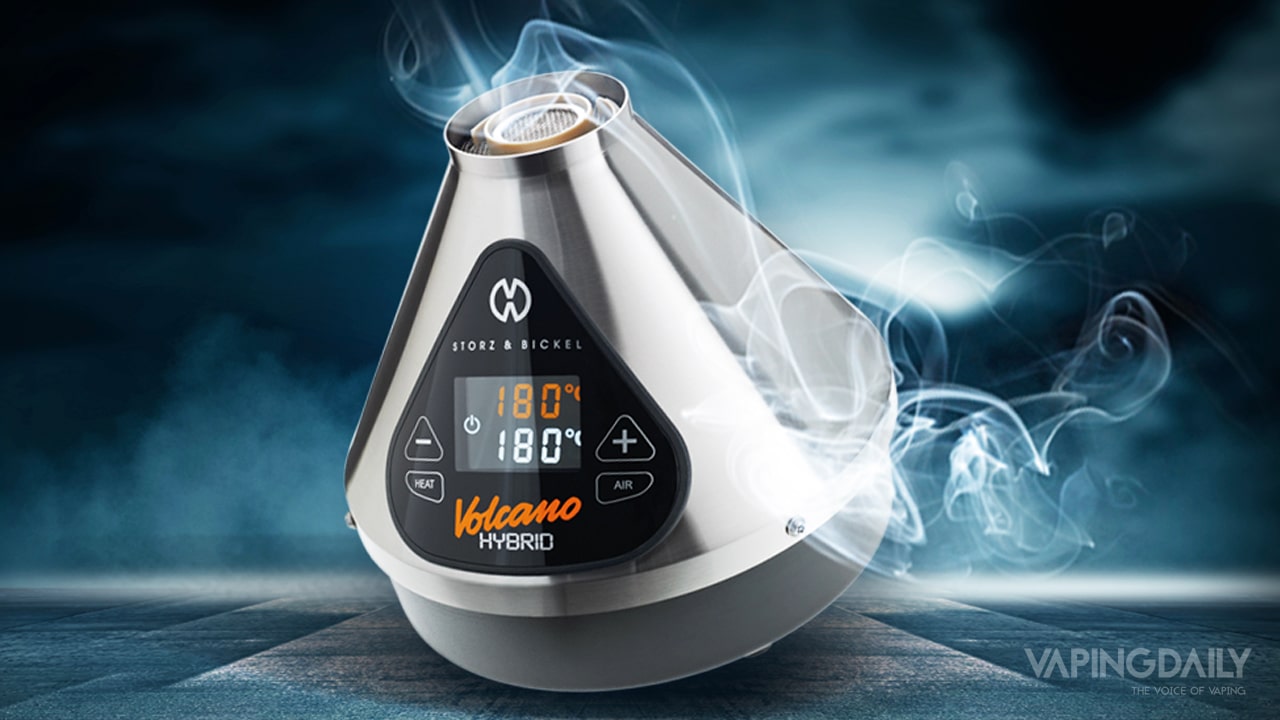 This heater ramps very quickly, heating the herb in 60 to 120 seconds. Finally, it has an app that makes the settings control more easily.

The Volcano Hybrid vaporizer might look like the previous model because of its black and silver body and pyramid design. But the digital touch screen is what separates it from its predecessors. Because of this brand new interface, it is now easier to control the functions. For example, the display tells the user what the temperature and power levels are.

The Volcano Classic models utilized bags for the vapor, but the Hybrid vaporizer uses a whip in addition to a bag system. The whip is a long and bendy tube through which the user inhales the vapor.

The main advantage of choosing the whip over the bag is that the vapor cools down as it flows through the tube. Thus, it allows the user to focus more on the flavor rather than the heat. The Hybrid is quite expensive and not very portable. It can cost upwards to $699, but the price is worth it with all of these features.

The Volcano Hybrid is expensive, but it is cumbersome, and it does not have a battery. It gets its power from a wall socket. This Volcano vaporizer is strictly for desktop vaping.

Whether one uses the whip or the balloon, it produces cool and high-quality vapor. In addition, it will encapsulate the flavor of whatever herb is loaded into the unit.

The Volcano Hybrid vaporizer also provides a lot of vapor, and the amount of vapor can be adjusted by controlling the fan. As a result, cloud chasers and flavor lovers will both be satisfied with the Hybrid’s performance.

What Comes with the Volcano Hybrid Kit?

The new Volcano kit comes with a full set of equipment.

It is a German-built and designed piece of vaping machinery. Germany is well known as an excellent exporter of finished goods. The Volcano Hybrid vaporizer is no different.

Also, it has a simple design that has easily available spare parts. It is easy to clean, too. To clean it, just brush the screen and the vaporizing platform. If anything does go wrong, the Volcano Hybrid vaporizer has a three-year warranty.

The new Volcano has a lot of other accessories that make using the device more convenient. For example, it comes with dosing capsules prefilled with herbs and placed in the heater. Also, these capsules were used for the Crafty and Mighty vaporizers. Using them makes it easier to vape. 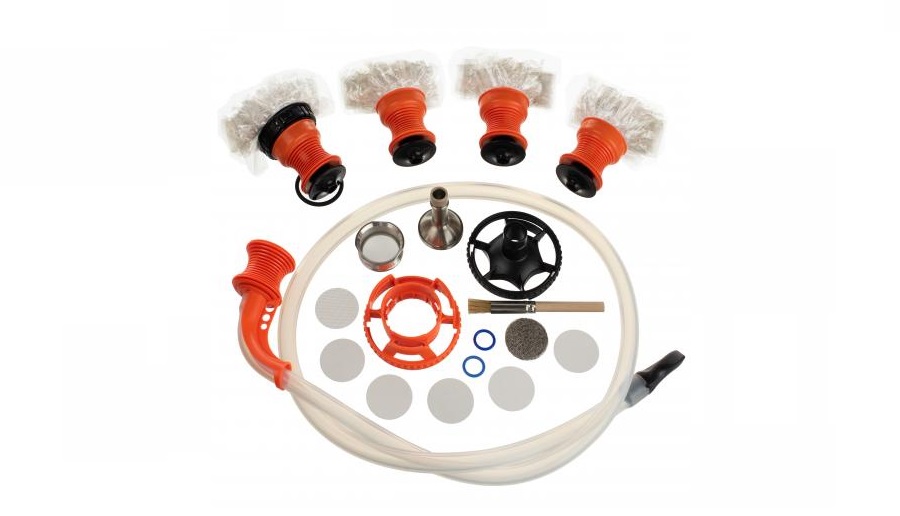 The filling set allows the user to fill up to forty capsules at once. In addition, it makes refilling the capsules easier and less aggravating. The filling set also comes with a grinder and a containing that can hold up to eight of these capsules.

Another accessory the new Volcano vaporizer can use is a filling chamber reducer. Using this allows the user to put a smaller amount of dry herbs in the oven. Users can buy the reducer on its own, or it can come with the chamber. It is also capable of supporting the dosing capsules.

How to Use the Volcano Hybrid Vaporizer

There are two ways to use the Hybrid:

The app is connected to the Hybrid via Bluetooth. Thus, it can be used to perform many functions without using the buttons on the Hybrid itself. In addition, the app allows the user to control nearly every setting, including power and temperature control.

The app can also control things like the speed of the fans when it powers off while allowing the user to customize heating across a specified time frame. It also provides useful information about how the Volcano vaporizer is doing. For example, it lets the user know the speed of the fan and the temperature. In addition, it has helpful information on how best to use the Volcano vaporizer.

The app is also compatible with the Crafty vaporizer. And it is compatible with iPhone and Android operating systems. Users can download them on the App Store and Google Play free of charge.

Volcano Classic is a desktop vaporizer like the Hybrid. It heats up quickly, and it has temperature control, hands-free vaping, a ceramic heating element, but no LCD display. 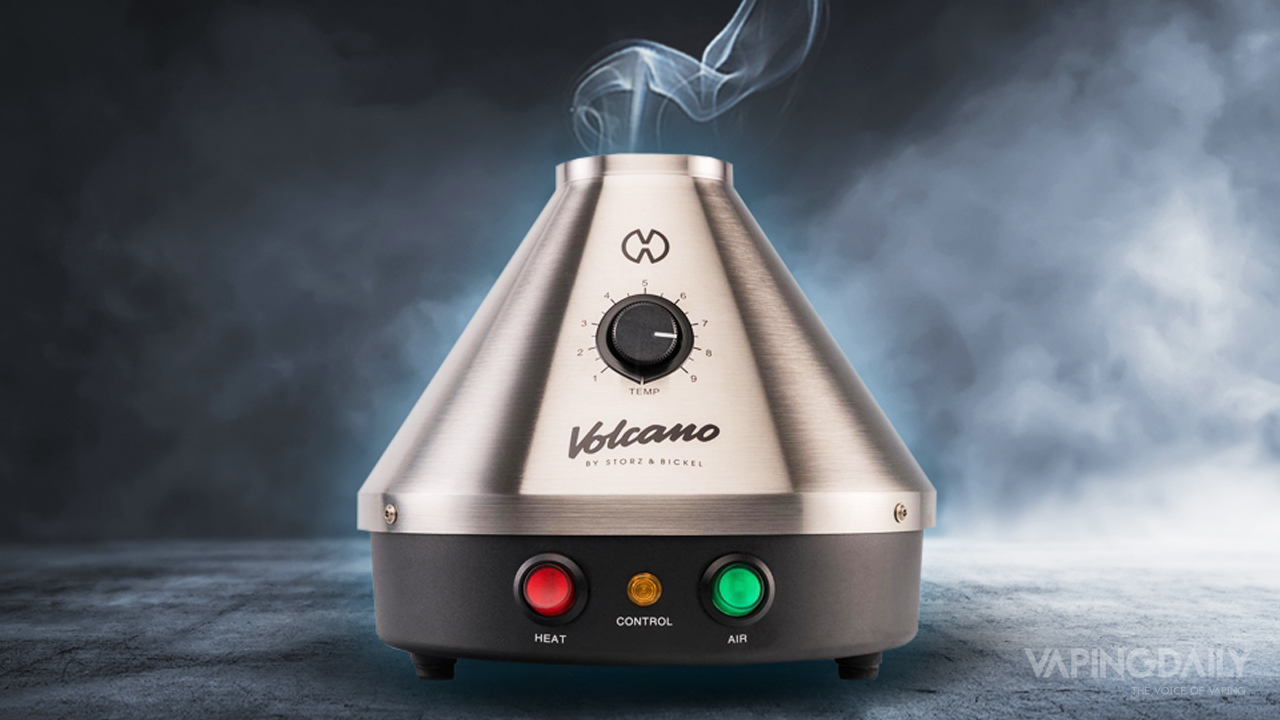 The Plenty is another device that Storz and Bickel manufacture. However, it provides excellent results for those who use it. 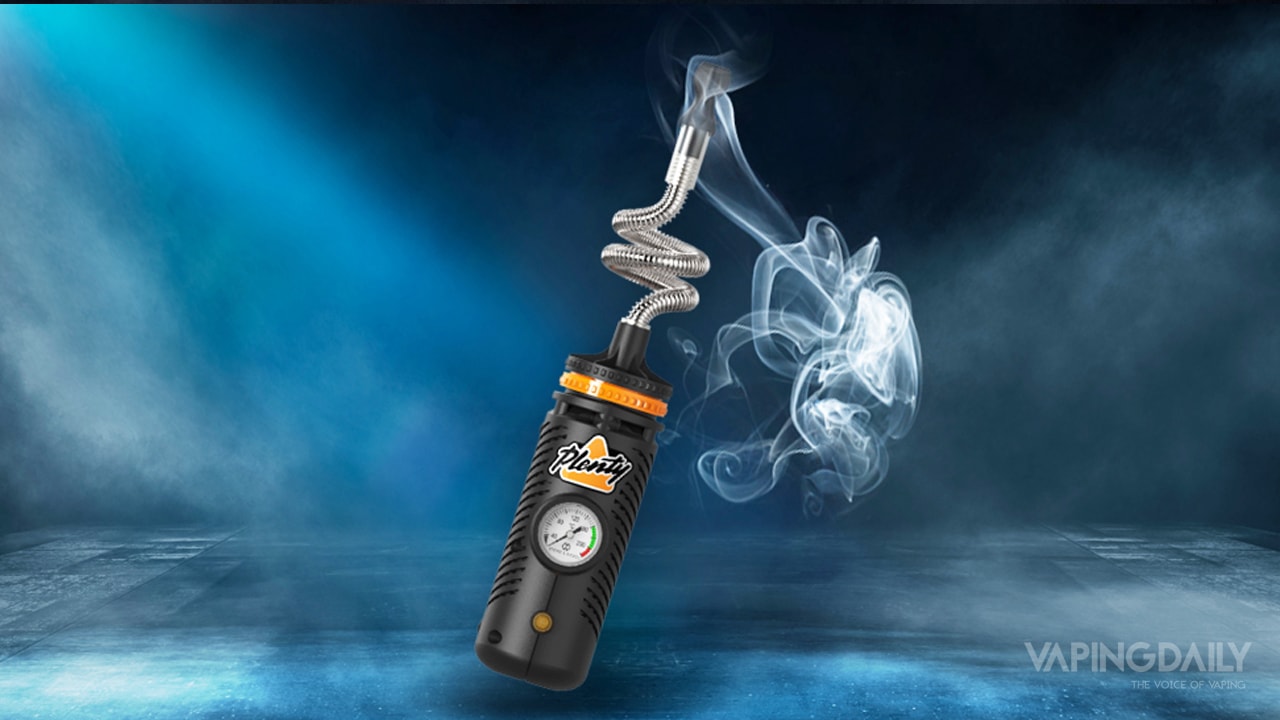 The advantage of using Plenty is that it has straightforward temperature controls. Set the heat on a scale of one to seven, and then start vaping through the tube. This device is a desktop vape for people who are looking for something easy to use. It is also much cheaper, selling for under $300. Those who want something with more settings and accessories should look into getting the Volcano Hybrid vaporizer instead.

Storz and Bickel also make the Mighty, and it vaporizes herbs and concentrates very well. It is a vape pen Volcano Hybrid!

The most significant difference is that it is smaller and much more portable. While small, it is not like having a pod mod. The thing is gigantic and does not fit the hand well. In addition, it is made out of plastic, and some people might be wary of buying a device made out of plastic because of its propensity to melt over time.

Is the Volcano Still the Best Vaporizer?

The Volcano is for dedicated users who have the resources and willingness to spend a lot of money on a top-of-the-line device. But many other portable devices are better suited to the casual user who has a limited budget and does not need the performance and output that the Volcano can produce.

How to Reset My Volcano Hybrid Vaporizer?

To reset a Volcano Hybrid vaporizer to its original factory settings users need to:

Does the Volcano Hybrid Work With Concentrates?

How Do You Dab With a Hybrid Volcano?

To dab with the Volcano Hybrid vaporizer users need to first install the liquid pad that comes with the device that supports concentrates. With the pad installed, users can:

What Temperature Is Best for a Volcano Vaporizer?

The best temperature for the Volcano vaporizer depends on the user’s preferences as different temperatures yield different results. The Volcano has a temperature range of 40 to 230C and comes preset at 350F (or 176C), which is a good starting point for most vapers.

But the Volcano Hybrid also has precision temperature control so users can play around with their preferences to find the right one.

How Long Does It Take a Volcano Vaporizer to Heat Up?

Conclusion: Is the Volcano Hybrid Vaporizer Worth it?

The Hybrid vaporizer is a high-end device that is suitable for vaping at home alone or with friends. While it is possible to carry it around in a backpack and take it somewhere, it is ideal for gatherings of friends who like to vape in different ways. Hence, why it comes with whips and balloons. These accessories give it a lot of versatility that makes it great for vapers of all kinds.

With its Android and iPhone compatible apps, the huge amount of accessories, and excellent flavor and vapor production, this monster of a vape is excellent for every vape collection.

We welcome thoughtful and informative comments from readers who have used the Volcano Hybrid vaporizer. Please tell our other readers and us about your vaping experience.

By using our website, you agree to the use of cookies. These cookies help us understand how customers arrive at and use our site and help us make improvements. Hide this message More on cookies »